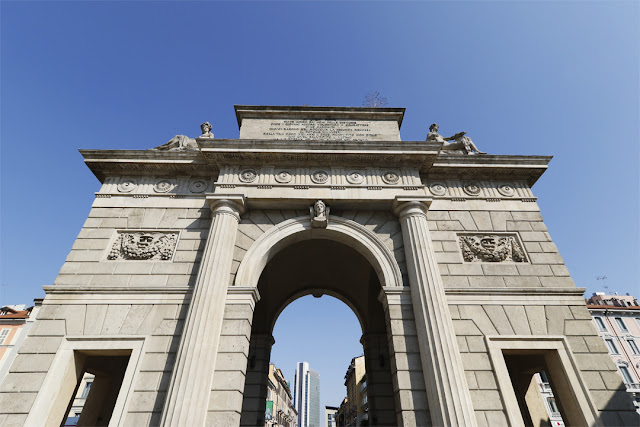 PORTA GARIBALDI (1826-1828) prevously named PORTA COMASINA because was the starting of the old way to COMO.The customs houses were added in 1836 and the gate is in DORIC STYLE,the district of the city around take the name from the door(PORTA GARIBALDI).The door was built to commemorate the vist of FRANZ JOSEPH I OF AUSTRIA in Milan when the city was under AUSTRO-HUNGARIAN EMPIRE with house of HABSBURG-LORRAINE.Thank to them Milan start to became the big and modern city is nowdays.In 1859 GARIBALDI and the soldier enter in the city passing by after the victories of SAN FERMO and COMO.Nowdays you can read the written on the door remembering the facts:"HERE IN THE FOOTSTEPS OF ENEMY NAME,THE IRON OF THE ITALIC YOUTH RECORDED THE COMO'S VICTORIES."Another intersting fact is that during the FIVE DAYS OF MILAN march,18-22 1848,when people want to catch away the AUSTRIANS it was the second city gates conquered by Italians.