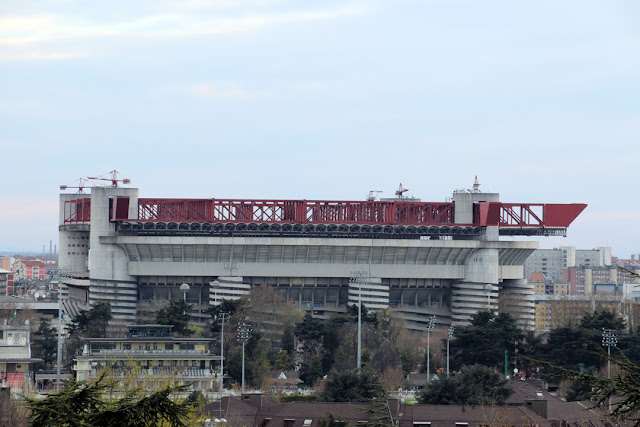 The city stadium F.C.INTER (1908),A.C.MILAN (1899) homebase.Named in 1980 to the great football player from the two city teams and football world cup twice winner (1934-1938) GIUSEPPE MEAZZA (milan,23,august,1910-rapallo,21,august,1979).Before 1980 it was known simply as SAN SIRO because at the beginning when it was built 1925-1926 the only city landmark in the area was the church of SAN SIRO ALLA VEPRA (1456).The inaugural match between A.C.MILAN vs F.C INTER ended with the final result 3-6.The first player to  go in goal in the new stadium was GIUSEPPE SANTAGOSTINO (milan,18,march 1901-milan,1,april,1955)from A.C.MILAN.The full capacity is more than 81.000 seats and spectators.On saturday 29,may,2016 it will host the THE CHAMPIONS LEAGUE FINAL 2016 between the two spanis teams REAL MADRID (1902)-ATLETICO MADRID (1903).Inside you can visit a football musuem recall the history of the soccer from the begin.It was international ranked as one of the most beautiful  football stadium worldwide.