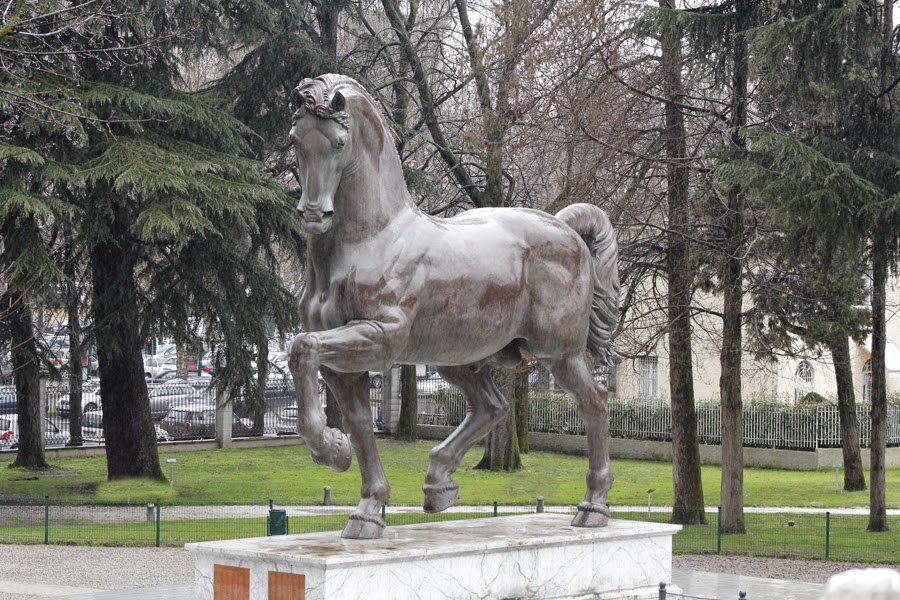 The long story about Leonardo's horse...Commissioned by the Duke of Milan LUDOVICO IL MORO to LEONARDO DA VINCI in 1482 but not finished at all.Originally it was commissioned to commemorate the Ludovico's father Francesco.Leonardo produced a clay model but it was detstroyed by French soldiers when invaded Milan in 1499,taken as strike by their archs and arrows.Five century after....Leonardo's surviving material and project were used to complete the opera.In 1977 CAHRLES DENT began to set up an organization to project and finance the horse.Project's cost was nearly 2,5 milion dollar.When Dent died in 1994 the project was abandoned another time.FREDERIK MEIJER take the project under his supervision and was ready to finance the opera,with only one tought,one opera for Milan and another one for his park located in Grand Rapids(Michigan).It was commissioned to the artist NINA AKAMU to made this great opera.Finally 1999 more than 500 years after the horses was finish,the dream come true.Placed one in Milan and one in Grand Rapids.The Milan's horse is placed inside the SAN SIRO RACETRACK,and,a smaller one in downton Allentown's Community Art Park closer to the Baum School of Art in memory of Charles Dent.In 2001 another smaller was placed in Piazza della Libertà in Vinci(leonardo's town)Italy.According to the collective art world the horse is the biggest and largest bronze equestrian statue all around(compare the layout racecourse fence and cars on the pic).