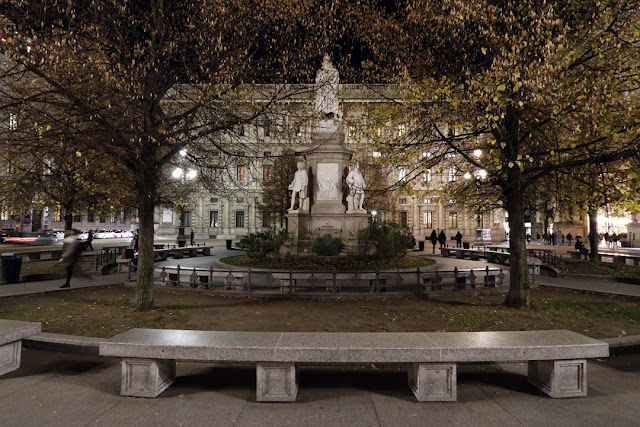 Night in PIAZZA DELLA SCALA.View on PALAZZO MARINO (1557-1563,renewed in 1872-1892) since 1861 the headquarters of Milan's city government it was built for the genoan trader and banker Tommaso Marino by architect GALEAZZO ALESSI.The square was designed by milanese archistar LUCA BELTRAMI (milan 1854-rome 1933) in an area dense of medieval pieces demolished for the new ex novo site.There's no much change since the new square opening in 1858.The lampposts,the cast iron founatin and the flowerbeds around the LEONARDO DA VINCI monument by LUIGI MAGNI from 1872 whic stand in the centre only to remember the genius from Vinci made in the city some of his most worldwide well known masterpieces in Milan one for all THE LAST SUPPER.