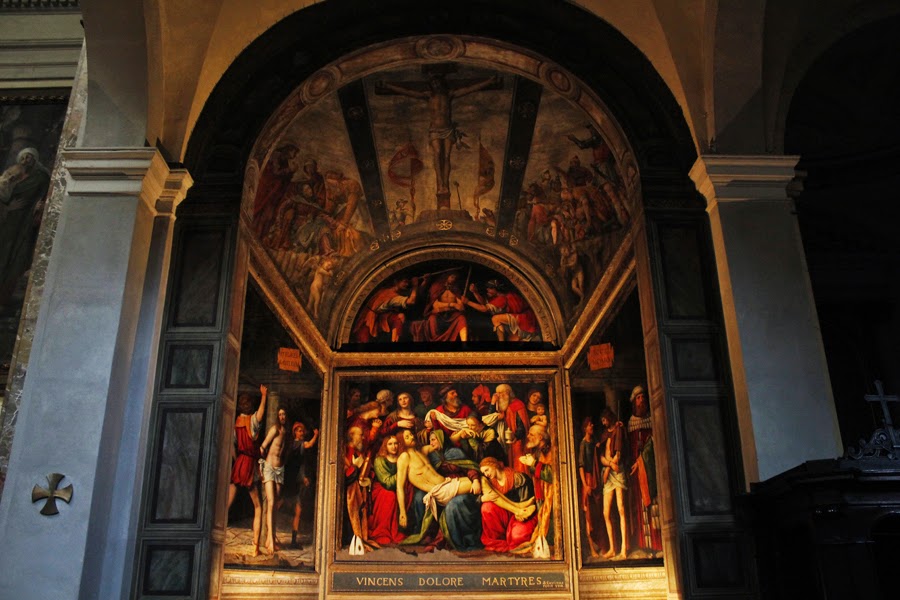 For Easter i go Inside SAN GIORGIO AL PALAZZO church,where you can admire the PASSION OF CHRIST(1516) by art master BERNARDINO LUINI.The name San Giorgio al Palazzo(palace) derives from palatium,the large imperial complex built in 3rd century which once adjoined the church.Founded in 751 and dedicated to SAINT GEORGE by bishop Natale,it was rebuilt by Romanesque period with a central nave and two side aisles.It underwent a further major change in 1623,when FEDERIGO BORROMEO commisioned FRANCESCO MARIA RICHINI to enlarge the choir.Construction of the ciborium and high altar began in 1728.FRANCESCO CROCE'S facade was not finished until 1778.The most recent change was made by LUIGI CAGNOLA who between 1800 and 1821 redesigned the pillars and vaulted ceilings in the Neo-Classical style,and by ALFONSO PARROCCHETTI,who in 1889 began work on the new transept and dome,presbytery,apse,sacristy and bell tower.Inside is a beautiful cycle of paintings and frescoes depicting scenes from The Passion Of Christ,by Bernardino Luini,and an altarpiece SAINT JEROME by another art master GAUDENZIO FERRARI.